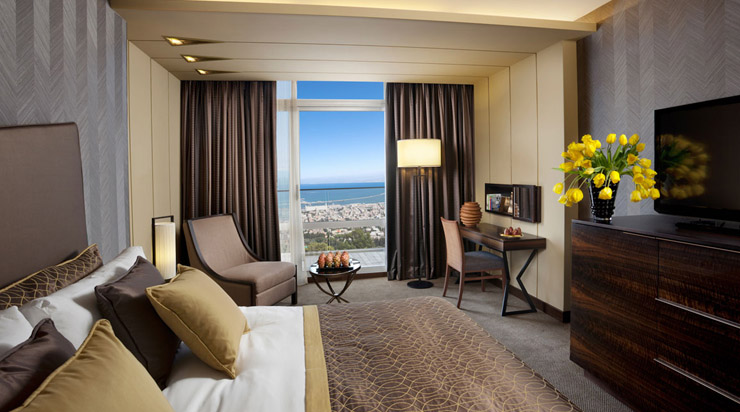 Dan is Israel's oldest, most prestigious leading hotel chain. The chain has 13 super deluxe and deluxe hotels, all offering high standards of luxury accommodation, service and first-class cuisine. The Dan Hotels is proud to combine Israeli tradition with international expertise.

The history of the Dan Hotels dates back to June 1947, when two brothers, Yekutiel and Shmuel Federmann, purchased a 21-room guesthouse called Kaete Dan by the sea in Tel Aviv. In 1982, the corporation began trading on the Tel Aviv Stock Exchange (TASE: DANH). The Federmann family owns some 87% of its shares.

The Dan's flagship property, the King David, Jerusalem, a member of The Leading Hotels of the World, is one of the most magnificent hotels in the world, a fact endorsed time and again by world leaders and celebrities choosing to stay there, and has become the official hospitality hotel for the State of Israel. The chain has 3 additional hotels in Jerusalem two hotels in Tel Aviv, both situated on the shores of the Mediterranean Sea just minutes away from the city center as well as hotels in prime locations in Haifa, Caesarea, Herzliya, Eilat and Ashkelon. All offer the same high international standards of luxury accommodation, service and first-class cuisine.

In recent years the Dan Hotels has extended its business facilities throughout the chain and pioneered an innovative system of high-speed wireless access to the Internet. In addition to the Business Centers, each hotel offers conference and banqueting facilities. The largest of which is the Dan Panorama Tel Aviv, which has a capacity of up to 2,500 people. In conjunction with QAS, the company manages the Dan Lounges, the V.I.P. lounges in Terminal 3 at the Ben-Gurion International Airport.

In addition, together with "ORT" the company manages 'Dan Gourmet', the Israeli Centre for Culinary Studies and Hotel Management, a leader in the culinary field which offers a large range of courses and seminars. The company also manages 'Idit Food Logistics Ltd.' and the subsidiary company "Tivtaim" which delivers quality food services, whilst conforming to high nutritional standards.

The chain's first hotel outside of Israel, situated in a modern technology park near Bangalore, India, is scheduled to open at the beginning of 2017.

Meanwhile, the company has also signed a rental agreement with "Amidar" for a property in Tel Aviv which will be converted into a unique business hotel, comprised of 100 rooms, of a high hospitality standard.

During more than 60 years of existence, the Dan Hotels has built up a reputation of excellence and attention to detail that keeps people coming back. About 54% of the total bed nights in 2014 were overseas tourists, the rest were local. The average occupancy of the chain in 2014 was 65.9%.